The Mad Dogs of London: A Tale of Rabies

There was panic on the streets of London in 1760, and the city’s newspapers weren’t helping the situation. Hundreds of column inches, for week upon week, were full of terrifying reports about an outbreak of attacks by rabid dogs. Armchair experts even wrote letters to newspaper editors offering advice and hypotheses on the causes and prevention of rabies (or “hydrophobia” as contemporaries called it).

Rumor fueled the journalistic fire, and the scare stories came in thick and fast. The London Chronicle was just one of many newspapers that reported the following representative sample of  incidents.

A rabid dog bit a child on the hand in the Strand, and her parents had her arm immediately cut off to prevent the infection spreading, but the unfortunate girl expired soon after, in great agony.

One Sunday morning, a William Hambly of Deptford was getting into his coach, when he was bitten by a “mad dog,” which had come running down But Lane from London Road. The alarm was raised, and the dog was soon hunted down and shot.

A nine-year-old girl of Virginia Street, Wapping, was bitten by a puppy. Shortly afterwards she began to show signs of madness, and her parents were obliged to tie her down to her bed. It was reported that a few days later he raved and barked like a dog.

The son of a ticket porter of Thames Street was also savaged by a stray mutt, but as there appeared to be no subsequent signs of madness about him, his death a while after the attack was attributed to fright rather than to the wound itself. Another report stated that a mad dog had bitten three other dogs in Islington, and also two cows belonging to a Mr. Pullein. [1]

Such stories unnerved the people of Georgian London, and not without good reason. Even today, rabies is the most deadly virus on earth—more so than Ebola—with nearly a 100 percent mortality rate in the unvaccinated. Since ancient times, it had been recognized that the virus was contracted via an animal bite. In 300 B.C., Aristotle wrote that “Rabies makes the animal mad… It is fatal to the dog itself, and to any animal it bites.” Pliny the Elder also recognized this mode of transmission, but added that dogs could become rabid by tasting the menstrual blood of a woman. [2] (Seems legit).

The first mention of rabies in Britain dates back to 1026 A.D. A Welshman named Howel Dda reported that numerous dogs were suffering from the “madness.” As a result, a law was enacted in Wales that called for the killing of any dog suspected of having rabies. In addition to preventative measures, doctors ofered a multitude of suggestions for how to cure the virus once a person contracted it. These included various herbal remedies such as Scutellaria lateriflora, also known as  Mad-dog Skullcap (a member of the mint family); and cauterizing the wound with a hot iron. [3]

It wasn’t until the 18th century, however, that large outbreaks of rabies began to occur in Britain. With public alarm at fever pitch in 1760, London’s Common Council decided it was time for a radical solution. On August 26th, the Council issued an order that a bounty of 2 shillings should be paid to public-spirited Londoners for any stray dog killed. As a consequence, boys, apprentices, and nefarious youths started going about the city carrying clubs and cudgels, with the intention of butchering numberless dogs. Their bloodied and battered carcasses were tossed in ditches in Moorfields. The Gentleman’s Magazine reported that “No less than the bodies of thirty dead dogs were told in one day…by a person of undoubted veracity, who was only casually passing by that way.” [4] 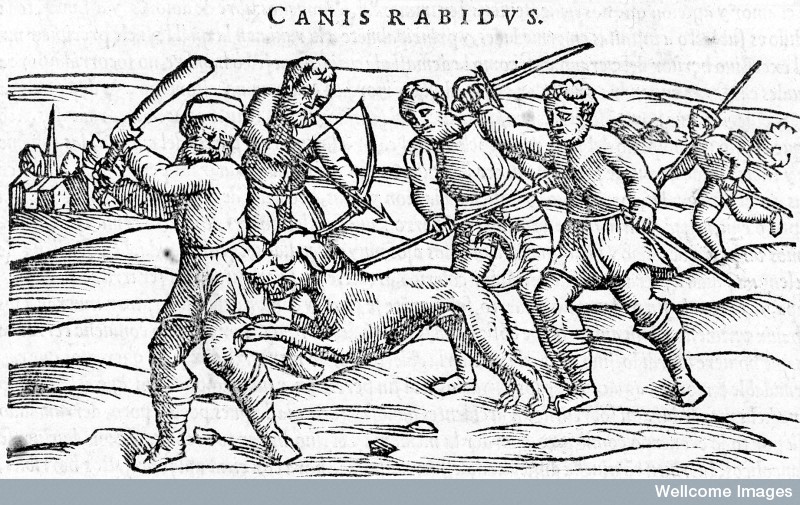 The Council’s actions were condemned by many animal lovers as licensed cruelty. The Gentleman’s Magazine added their concern: “not one in a thousand [of these dead dogs] will be mad…Those who make it a revenue to kill the dogs will carefully avoid meddling with any that have bad symptoms, from the dread of the consequences.” [5] One famous name was dragged into the debate about the rights and wrongs of the dog cull. Renowned pug-owner William Hogarth, doyen of satirical engravings, had his own art-form turned against him by the caricaturists, who showed him in a print entitled, The Dog killers of London & Westminster or licenc’d Cruelty 1760. Surrounded by men beating strays to death in the street, the distraught Hogarth laments, “Oh! My poor Pugg. Oh! My little Dog.”

The rabies outbreak lasted three years. Eventually, the infected dogs died out or were killed, and calm was restored to the city. It would take another 125 years before Louis Pasteur would create a vaccination for the deadly virus and test it on 9-year-old Joseph Mesiter. But that, dear reader, is a subject for another blog post.

If you enjoy my blog, please consider supporting my content by clicking HERE.

1. I am hugely indebted to Adrian Teal and his fantastic book, The Gin Lane Gazette, for the 18th century stories cited in this article. Also, see The London Chronicle (August 1760) for similar tales.
2. Both Aristotle and Pliny were quoted in Arthur A. King, Historical Perspective of Rabies in Europe and the Mediterranean Basin (Paris, 2004). This book can be found online. It has a lot of detailed information about historical perceptions of rabies. Another great (digestible) article on the subject is by Lisa Smith, “The Problem of Mad Dogs in the Eighteenth Century,” The Sloane Letters Blog (27 January 2014).
3. Mike Rendell, “Rabies in the Eighteenth Century,” Georgian Gentleman (5 July 2012); and G. Fleming, Rabies and Hydrophobia. Their history, nature, causes, symptoms and prevention (London: Chapman and Hall, 1872), 405.
4. The Gentleman’s Magazine (August 1760). A compilation of this magazine from this period can be found here.
5. Ibid.