The Fatal Fashion of the Georgians 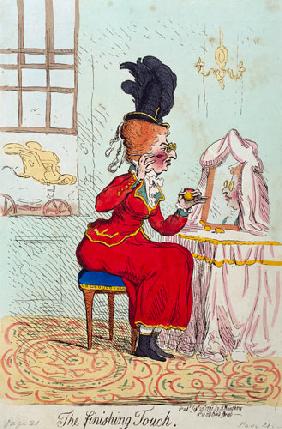 The other day, I walked through the makeup section of a department store. Every step of the way, I was bombarded by sales attendants trying to sell me the latest anti-aging potions. There was Rodial Snake Venom—an anti-wrinkle cream which allegedly simulates the paralysing effects of a viper bite to reduce expression lines in the face—as well as a host of other products including Freeze 24/7, which purports to be a “clinically proven dream cream.” Topping the list of quack remedies was the “Vampire Facelift,” a non-surgical procedure involving the reinjection of gel-like substance derived from the patient’s own blood.

With all these products on the market today, you might think that we are uniquely obsessed with finding eternal youth. Yet, people in the 18th century were equally concerned with turning back the hands of time, and their beauty regime could be just as futile (and toxic) as our own.

The proliferation of potions and elixirs reached epic proportions in Georgian England. Everything from anti-baldness creams to slimming pills were offered. Each one promised its own miracle cure. Each one offered the consumer hope in a jar (which, incidentally, is the name of a 21st-century product by Philosophy).

One of the most famous examples is Parr’s Life Pills—named after a man who reputedly lived to 152 in the 16th century. These “remarkable” pills purported to extend the consumer’s lifespan by decades; and contained a combination of aloe, rhubarb and jalap which were flavoured with liquorice powder, treacle and sugar. Parr’s Life Pills were so popular that they persisted well into the 19th century, where one cynic wrote:

I hearby certify and swear to it, that at the age of fifteen years I had the misfortune to fall into the crater of Vesuvius, and was burned to a cinder; but on taking two of Parr’s Life Pills, I completely recovered. At Waterloo I was blown to atoms by a Congreve rocket; but after taking one box and a half of the Pills I speedily got well, and with the exception of occasional shooting pains, which a single pill invariably relieves, I have since been a better man than ever.

In the grand scheme of things, Parr’s Life Pills were rather harmless, but one staple of the Georgian’s health and beauty regime most certainly was not: makeup.

Both Georgian women and men coveted rouges, lipsticks and powders that enhanced and lightened their complexions. Most of these cosmetics were homemade. Unfortunately, a majority of them also contained toxic substances that could prove fatal over time.

For instance, many 18th-century rouges were made using the lead-base ingredient, carmine (see pot, left). The rouge was applied to the cheeks using wet bits of wool. The crimson cosmetic was also available as a lipstick, which was made by mixing carmine with plaster of Paris, a substance similar to mortar or cement. And let’s not forget the powders which gave wealthy Georgians that famous cakey-white look. These were sometimes made from finely flaked lead and most certainly caused serious medical problems—such as nausea, headaches, blindness or even death—for those who used them over long periods of time.

And then there was hair. I’ve talked extensively about the medical services offered by barber-surgeons. In 1745, however, the barbers split with the surgeons, who went on to form their own medical guild. Henceforth, the barbers were restricted to tasks relating to…well, barbering! Thus, the Georgian barbershop—with its noticeable absence of leeches, lancets and tooth extractors—is the most immediate (and recognisable) predecessor of the modern-day salon.

Georgian barbers began building their reputations as wigmakers after their split with the surgeons. Both men and women wore wigs in this period, the latter going to great lengths when it came to design and height of the hairpiece.

Adrian Teal captures the growing extravagance of the era brilliantly in The Gin Lane Gazette. As the book progresses through the 18th century, the wigs grow higher and higher, till they are indeed taking up entire pages in this exquisitely illustrated romp through Georgian England (see right).

As beautiful as these creations were, they could also be toxic. Barbers often used lard at the base of the wig so that it would adhere better to the scalp. But the lard also attracted mice, which sometimes burrowed deep inside these elaborate hairpieces. Those who could afford to keep up with this extensive beauty regime frequently suffered from infestations of lice or fleas, as well as an array of scalp problems due the unhygienic conditions of the wigs.

Hardly a romantic view of the “Romantic Period!”

So next time you walk through a department store and feel tempted to purchase the latest anti-aging product, think of the Georgians with their potions, elixirs and wigs.

And remember: beauty always comes at a price.

If you enjoy my blog, please consider supporting my content by clicking HERE.