Piss Prophets & The Wheel of Urine 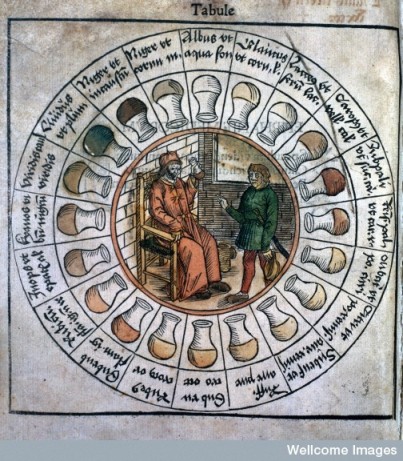 I recently watched an episode of Dr Oz in which he pontificated about the colour of some unfortunate woman’s urine in front of millions of viewers. She offered up a cup of what looked like diluted molasses to the good doctor for judgement. ‘Dehydration,’ Dr Oz decreed.  ‘More water!’

(As if she didn’t have a sneaky suspicion of this already from the looks of the dark, murky fluid residing in the bottom of the plastic cup.)

Watching this spectacle reminded me of the medieval urine wheel used to diagnose disease based on the colour, smell and taste of a person’s urine. And yes, I did say taste. I’ll return to that point in a minute.

Before stethoscopes, blood tests and x-rays, a pot of pee was a crucial diagnostic tool. Due to the enduring influence of the Greco-Roman physician, Galen (131-201 AD), medical practitioners believed that urine was vital in gauging the health of a person’s liver, where blood was thought to be produced. Analysing urine was the best way to determine whether a patient’s four humours (blood, phlegm, yellow and black bile) were in balance.

The wheel consisted of 20 colours ranging from ‘white as wellwater’ to ‘ruddy as pure intense gold’ and lastly ‘black as very dark horn.’ George III (1738-1820) reportedly had purple urine. This could have been a sign of a rare condition known as porphyria which can manifest itself in many of the neurological disorders for which the ‘Mad King’ was known.

Of course, examining a person’s urine inside a dark chamber pot proved problematic, so practitioners created a round-bottomed glass flask shaped like a bladder called a matula. Indeed, the image of the doctor holding up the urine-filled flask to the light came to epitomize medicine during this period, and is still a recognized symbol today.

The smell and taste of a patient’s urine were equally important when determining a course of treatment, and often corresponded with specific colours. In 1674, the English physician Thomas Willis described the urine of a diabetic as ‘wonderfully sweet as if it were imbued with honey or sugar.’ He also noted that diabetic urine was often the colour of honey, something observed by earlier practitioners using the urine wheel. Willis went on to coin the term mellitus (literally honey sweet) in diabetes mellitus, and for a long time, the condition was known as ‘Willis’s disease.’

The urine wheel may not have been useful in diagnosing diseases as we understand them today; however, it was used in standard practice during the medieval period. By the 16th and 17th centuries, urine wheels had become so prolific due to the printing press that all sorts of people were using them, including unlicensed medical practitioners, or quacks. The practice of uroscopy—using urine to analyse a patient’s health—soon turned into uromancy, which was something altogether different.

Uromancy is the art of divination using urine. Piss prophets (as they were known) each had a different method for predicting the future. Some took omens from the urine’s colour; others from its taste. Most commonly, piss prophets ‘read the bubbles’ seconds after it hit the divination bowl. The presence of large bubbles spread far apart signified that the urinator was about to come into a lot of money. Conversely, the presence of small bubbles packed tightly together signified illness, loss or the death of a loved one. Even pregnant women visited piss prophets to the hopes of learning the sex of their babies.

Today, physicians no longer taste our urine, nor do they spend much time contemplating its smell or colour (Dr Oz aside). That said, asking a patient to pee into an impossibly tiny cup is not an uncommon request, as anyone entering a hospital or medical office today knows. One can’t help but think the experience would be much more enjoyable if the doctor, upon being presented with the warm cup of cloudy liquid, poured it into a divination bowl and told us we were all going to be rich.